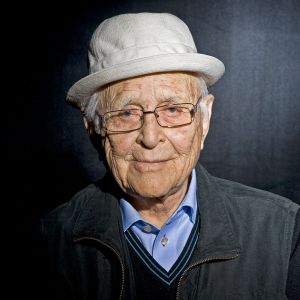 On July 27, 2022, Norman Lear turned 100 years old. Many know him as the legendary creator, writer, and producer of such iconic television shows as All in the Family, The Jeffersons, Maude, The Golden Girls, and so many others. I had the privilege of meeting Norman Lear in 1992 at Marianne Williamson’s 40th birthday party. At that time, he was a spry 70 years young and crowned with his trademark poplin fabric fedora!

Norman Lear said recently that his motto for a long life could be summarized with these words: over and next and the hammock in the middle. What he meant was…well, let me explain that in a moment, but first, I want to share a little context from his life.

Lear was a member of what society has called the Greatest Generation, and he enlisted in World War II to protect freedom around the world as a member of the Army Air Corp. He flew 52 combat missions as a radio operator and gunner on B-17 bombers over Nazi Germany. His love of his country led him to share the stories of everyday people in the American family, not just the “Ozzie and Harriet” version of a family. The first airing of All in the Family in 1971 caused censors to put a disclaimer at the start of the show that read:

“The program you are about to see is All in the Family. It seeks to throw a humorous spotlight on our frailties, prejudices, and concerns. By making them a source of laughter, we hope to show – in a mature fashion – just how absurd they are.”

Using laughter to shine a light on our prejudices has been the hallmark of Lear’s style of comedy. As A Course in Miracles says, we have to learn to laugh at what we have cried about, not to make fun of it or demean it but to make sense of it. When we look clearly at the ego’s insane logic of making others “bad” so we can be good or justifying our need to separate others from us in order to be safe, we can’t help but chuckle at the absurdity of such approaches. After all, as we see, treat, or think of another, we see, treat, or think of ourselves. That is the essence of the Course’s message of a holy encounter. We either find ourselves in every encounter or lose ourselves; in each encounter, we are given another chance at salvation. 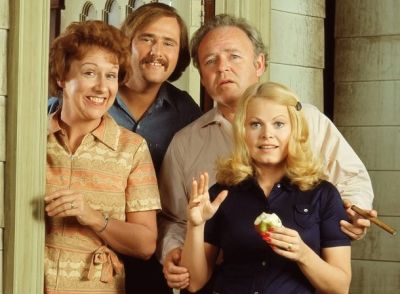 The cast of All in the Family

In the characters of Archie Bunker (a white man) and George Jefferson (a Black man), we see racism from both perspectives. Both are good men with flawed perspectives. As the world was changing in the tumultuous 1970s, racial tension, reproductive rights, and gender issues were brought to light through comedy, and people’s minds began to change. Compassion and understanding of those who did not fit the traditional family values of America were a threatening concept to the status quo. Norman Lear was dubbed “the #1 threat to the American family” by televangelist and founder of the Moral Majority, Jerry Falwell. Even President Richard Nixon said, “All in the Family will destroy us.”

Lear not only used his talent in the media but also founded a non-profit organization in 1980 called People for the American Way to emphasize the importance of keeping a division between government and religion. As he often said, a person’s Christian religion or faith should not be determined by their political party. He wanted the public to understand what the Declaration of Independence actually said, so he purchased one of the original copies of the Declaration (there were 200 copies printed on July 4, 1776) and had it travel to 72 cities in the United States over a period of three and a half years resulting in 4 million new voter registrations.

In celebration of his 100 years, he said that his success was a “glorious collaboration.” As he spoke about the many shows he had created in his career, tears came to his eyes when he talked about the importance of collaboration. In essence, he was saying that when people come together to create something helpful, miracles occur. We move past our limitations and become mighty miracle workers. That is why the Course tells us, “Salvation is a collaborative venture.” (T-4.VI.8) Nothing real or truly helpful can be achieved in an atmosphere of isolation and anger.

And now we return to the words: over and next and the hammock in the middle. Lear said these concepts were simple, valuable truths in his life. He explained that when dealing with life and its ups and downs, it is the over and next mentality that one needs to employ. When things happen, you can’t dwell on the past; you have to get over it and move on to the next. But the sweet spot is living in the now; that is, the hammock in the middle.

A Course in Miracles tells us that now is the only time there is. All time that we experience, whether as the past or future, is really for our learning. It has no other purpose. Therefore, dwelling in the past achieves nothing unless we learn from it and move on to a more productive future. Inevitably the only true learning goal for time is the awareness of now, so what better way to describe the blessing of living in the now than being the hammock in the middle of our fascination with time? If we can stay resting in that place of peace and stillness that is here for us now, we will become the miracle workers that the Course was born to bring forth on this planet NOW. This experience in time is not one of inertia or inactivity, but finally, real productivity.

The Course’s text contains a section entitled, “I need do nothing.” It is one of those sections the ego likes to misunderstand to exemplify withdrawal from the world and not caring about anyone or anything since it is all an illusion. But clearly, the world does not seem like an illusion to those of us who still function here, so we are given direction to make our time on this planet, at the moment, as close to Heaven as possible.

“To do anything involves the body. And if you recognize you need do nothing, you have withdrawn the body’s value from your mind. Here is the quick and open door through which you slip past centuries of effort, and escape from time. This is the way in which sin loses all attraction right now. For here is time denied, and past and future gone. Who needs do nothing has no need for time. To do nothing is to rest, and make a place within you where the activity of the body ceases to demand attention. Into this place the Holy Spirit comes, and there abides. He will remain when you forget, and the body’s activities return to occupy your conscious mind.

“Yet there will always be this place of rest to which you can return. And you will be more aware of this quiet center of the storm than all its raging activity. This quiet center, in which you do nothing, will remain with you, giving you rest in the midst of every busy doing on which you are sent. For from this center will you be directed how to use the body sinlessly. It is this center, from which the body is absent, that will keep it so in your awareness of it.”
(T-18.VII.7-8)

In this passage, we are given wonderful guidelines for awakening to the power of now. It tells us the body (and the world of form) is a great distraction, but we can use anything in this ego framework of the world to awaken to Spirit’s power. We take time each day to focus within: Doing our Course lesson, withdrawing thoughts of right and wrong toward ourselves and others, and becoming comfortable with the place of peace within us that is our power. We step back from the world and all its activities and refocus on the Presence within. But we are not done yet. For, we will then reenter this world, but we will reenter with “this quiet center” (Lear might call it the hammock in the middle) which will remain with us giving us rest in the midst of every busy doing “on which we are sent.”

The Course goes on to tell us that this center will stay with us to keep us connected to our true power. From this center, we can move through the difficulties of the past not by ignoring them but by understanding them and taking with us only the blessings and releasing the rest. By doing this, we allow our minds to move to a future that will support a new awareness where we see the importance of working together in harmony and collaboration, not separation and attack. We will experience the power that will be released in the now as we rest in the hammock in the middle.