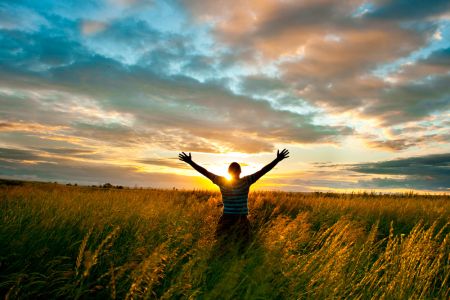 Typically as summer rolls around, we feel a sense of freedom. Schools are out of session, vacations from work are planned, the cold winter weather turns warmer, and summer, for those of us who live in the United States, brings to mind our country’s birthday and its struggle for freedom. This year, the pandemic has given us all a different experience of summer. Nevertheless, we are still seeking freedom, for freedom represents release from bonds that seem to confine us.

What confines you? Ask yourself this question. Is it the pandemic? Is it relationship issues? Is it lack of money? Is it a job or lack of a job? What imprisons you? What makes you long for freedom? It is not wrong to long for freedom, but it can become frustrating if we determine that freedom must come in certain ways. For example: I’ll feel free when this pandemic is over or if I get out of this relationship or if I get more of this or that. If we bargain for freedom in such a manner, we are setting ourselves up for disappointment because we are making freedom an external condition. Freedom is an internal choice.

A Course in Miracles defines freedom as forgiveness, saying that forgiveness is the only thing that will release us from our seeming bonds and show us the freedom that God has promised us. In the Course’s Workbook Lesson 332, we read, “Fear binds the world. Forgiveness sets it free.” When we are caught up in manipulating this world that is based on fear, we feel lost and hopeless. A pandemic rages around the world, insane wars devastate societies, and in our own backyard, and anger ramps up as the election nears. What can we see from the point of fear but more fear? But from the point of forgiveness, as guided by the Holy Spirit, we can experience freedom and release.

“Without forgiveness is the mind in chains, believing in its own futility. Yet with forgiveness does the light shine through the dream of darkness, offering it hope, and giving it the means to realize the freedom that is its inheritance.” (ibid)

How do we forgive? We make a conscious choice to release, offer love, and let God lead the way. In the Workbook Lesson 332, “Fear binds the world. Forgiveness sets it free,” we are given three steps for release:

1) Make the decision not to bind the world today. When you start your day, realize that you have a choice to look through the eyes of fear or love. One choice will bind you to a world of futility, and the other will release you to a world of possibilities.

2) Release how you think your decision to “not bind the world” will look. This is hard for us “egos.” We like to know how something is going to look. From our fear-minded, limited perspective, however, we could never imagine the beauty and freedom of the world God will show us if we put Him in charge. So, step back from your need to know, for just a moment, and allow God to fill in the blanks.

3) Extend forgiveness and experience freedom for yourself and the world. When we step back from our need to control the world and our lives and offer God our willingness to experience love, a feeling of release comes over us that is experienced by the entire world. Your choice to experience forgiveness instead of condemnation releases your mind and allows other minds to be released from their self-made prison by your example. 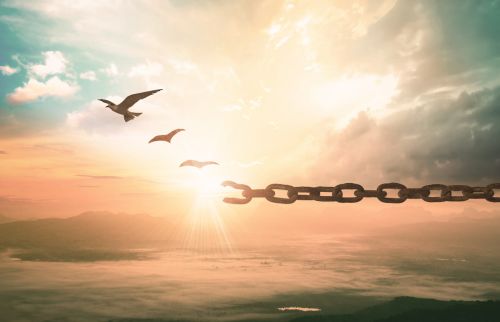 A Course in Miracles tells us over and over again that the decisions we make for healing and forgiveness affect our world. “The world you see is what you gave it…. It is the witness to your state of mind, the outside picture of an inward condition. As a man thinketh, so does he perceive. Therefore, seek not to change the world, but choose to change your mind about the world.” (T-21.in.1) Therefore, the gifts we give to ourselves of healing and forgiveness are the gifts we give to the world and vice versa.

I once read a story about a man who had been born with a withered leg, and from infancy had worn a brace on that leg. As he grew, the brace became a real challenge for him. He felt bound by it; he could not climb trees or run and play games like the other boys. As he got older, he became convinced he could not climb the “tree of life” with such a limitation. His father told his son not to worry about this leg, for he knew of a cathedral where a large pile of crutches and braces had been left by people who had gone there and been healed. He said, “Now you are old enough to go to the cathedral and ask the Lord for healing so you can leave your brace at the altar.” The boy was so excited!

The day came when the father and son entered the great cathedral. They knelt at the altar. The father said, “Son, pray and ask the Lord to heal you.”

The boy prayed with much faith. He felt a peaceful feeling inside. Then he opened his eyes and looked at his father. His father’s face was filled with so much love, beauty, and faith. The boy was so stirred by this vision that he stood up! But when he looked down, there was his withered leg, as it was before. Disappointed, the boy started back down the aisle with his brace thumping as usual. When he approached the door of the great cathedral, something incredible happened. He said he sensed a tremendous warmth in his heart. He felt as if a great hand passed across his head. He was boundlessly happy. He cried out to his father, “Father! You are right! I have been healed.”

Freedom comes as we release the bonds of this world, the fears from our minds, and offer God our willingness to be free through the gift of release — the gift of forgiveness. Whatever the dark fear is that binds you in your life, let God free you from the seeming limitations by allowing the light of forgiveness to rest on you and all you meet. He will free you from your “braces” the moment you offer freedom. “For as we offer freedom, it is given us.” (W-332.2:5)