“So will the year begin in joy and freedom. There is much to do, and we have been long delayed. Accept the holy instant as this year is born, and take your place, so long left unfulfilled, in the Great Awakening. Make this year different by making it all the same. And let all your relationships be made holy for you. This is our will. Amen.” (T-15.XI.10)

As we begin a new year, I am again reminded of the above commission given to us in A Course in Miracles. What stands out to me is the statement: “Make this year different by making it all the same.” The inference is that we are not very consistent in our commitments to healing. Does that sound like anyone you know? Yes, I know, you’re pointing to yourself. Aren’t we all?

What I love about the above passage is its lack of judgment. It is simply saying let’s start again. And yet there is an urgency when it says there is much to do, and we have been long delayed.

As a matter of fact, this passage prompted me to look again at Helen Schucman’s (scribe of the Course) words in her autobiography, in which she questions the inner voice about the coming of the Course. She wrote she was given a mental explanation which said “The world situation was worsening at an alarming pace. People all over the world were being called back to help and were developing what to them were highly unexpected talents, each making his individual contribution to an overall, prearranged plan. I had apparently agreed to take down a course in miracles…as part of the agreement.”*

Helen went on to write that she was told she was not yet ready to use the listening abilities needed to take down the Course, and because of that, she would have trouble doing so, which Helen did. None of that seemed to matter, as the inner voice continued, “People had reached a point where they were losing more than they were gaining. Thus, because of the acute emergency, the usual slow, evolutionary process of spiritual development was being by-passed in what might be called a celestial speed-up.” *

A few things always jump out at me when I read this personal note to Helen. First is the idea that the world is worsening at an alarming rate. That seems scary, but there have always been scary things in this world. This shouldn’t paralyze us or cause us to be okay with frightening, hateful acts, but it does help us to see that we can move through them and hopefully learn from them and finally transform them.

During the presidential administration of John F. Kennedy, the United States came very close to nuclear war with the then Soviet Union. I was just a child during the Cuban Missile Crisis, but I vividly remember my parents were very worried. Like most of us, I have read about the thirteen days in October of 1962. The Soviets placed missiles in Cuba, and during those thirteen days, the two superpowers faced each other down in a confrontation that would be the closest the world came to nuclear annihilation during the Cold War. In retrospect, I can understand why my parents were so afraid, but it also became a turning point for Kennedy and his insistence that there are no winners in a nuclear war. At that time, this idea was very unpopular with many of his generals. Now with our current understanding of the global danger of atomic fallout, using these weapons is unthinkable.

We’ve come a long way in our consciousness. Remember, when Helen received her personal message about the world worsening at an alarming rate, it was 1965. We have seen some great changes in thought since then.

At that time, self-help books were not around, no one had a personal computer or cellphone, there was no Internet, and the concept of social media was utterly unheard of. Since 1976 when the Course was published, we have certainly seen incredible shifts in consciousness. Just think about it…ideas of prayer, meditation, and forgiveness are now commonplace concepts that you find in all sorts of mainstream publications. You are no longer “strange” if you practice yoga; as a matter of fact, you’re considered “strange” if you don’t. There’s a yoga studio in almost every corner mall. Frankly, I think we have and are continuing to see this “celestial speed-up,” and WE are part of it! 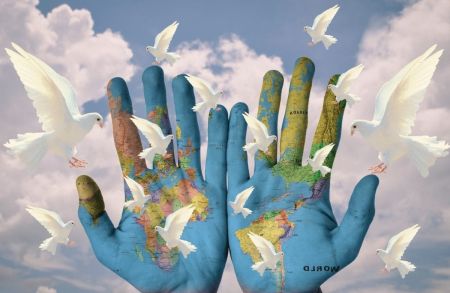 We should not let any of these comments frighten us; instead, they should give us a sense of urgency to continue to make the efforts to allow our relationships to be healed and not delay this process. We are not just doing it for ourselves, but for everyone.

The other thing that stands out to me is that we all have an important part to play in salvation. We have made an agreement to be here now, and whether we feel capable or have any idea what we are to do, we will be used for healing if we get the limiting thoughts of our egos out of the way.

Helen’s part was taking down A Course in Miracles, but she still questioned it by asking, “Why me?” To which the voice said to her, “Because you will do it” – she would follow through. You may be wondering, what is your part? Is it taking down a spiritual tome, inventing a cure for something, or solving global warming? Perhaps, but I think the answer is a little closer than you think. Your “part” is wherever you find yourself, meaning you are to do your part in the “Great Awakening” by being willing to consistently turn your mind to God amid your day and choose for love instead of fear.

As Helen was taking down the words of the Course, her partner in this process, Bill Thetford, was taking those words to heart. Neither of them knew what the Course would become (a few lines, a few pages, a book, etc.), but Bill knew the words had meaning to him, and he let them guide his life to heal his relationships.

One particularly difficult relationship for Bill was a work relationship. While Bill and Helen were secretly taking down the Course, they were both clinical psychologists working at Columbia University’s College of Physicians and Surgeons in New York City. It was a very stressful environment, and friendships were not easily made. Bill’s challenge centered on a particular colleague, so he set out to put the Course to practice.

In his prayer time, Bill was guided to not only hold the truth for his colleague but also to take some action. His guidance directed him to go into this fellow’s office every morning and chat with him — just some casual morning conversation. When Bill entered the office, this fellow would put his newspaper up in front of his face in an attempt to ignore Bill. Bill decided that his colleague’s actions would not put him off and chose to simply chat for a few minutes to the back of the newspaper as if it wasn’t there. He then got up and left. He didn’t get angry that his attempts at joining were not met; he merely offered his love and acceptance and knew that it was received whether the outside effects changed or not.

This tradition of going into this colleague’s office and chatting to the back of the newspaper went on for a week or so. Then one day Bill’s schedule changed, and he had to be gone for a few days. On his first day back, he again entered this fellow’s office for his chat, and instead of the newspaper going up, the newspaper came crashing down, and his colleague asked, “Where have you been?” This man had enjoyed Bill’s presence even though he never showed it and missed it when it was gone.

After that, this fellow became Bill’s “best friend.” As a matter of fact, he wanted to share a room with Bill when the staff attended an out-of-town conference. One evening after the conference activities ended, they were sitting in the hotel bar having a drink and the man, seeing a dish of almonds on the bar, mentioned that famed psychic Edgar Cayce once said if you eat ten almonds a day, you’ll never have cancer. Bill was stunned! How did this guy know about Edgar Cayce, he wondered? Bill had researched Cayce and had met Cayce’s grandson because the elder Cayce’s experience with inner guidance was similar to Helen’s. But he would have never thought his colleague would know about Cayce, let alone quote him!

Remember, though, we don’t know how to heal our relationships, so we are to let them be healed for us by the Holy Spirit – that Voice for God within our minds and hearts. Your job is not the healing but the willingness to remove the blocks so the healing can occur. When anger, judgment, or fear is present, we have blocked the presence of that help; our part is to become aware of these blocks and ask for help to let them be released. Then healing can occur through us, but not by us.

Making this year different by making it all the same and allowing our relationships to be made whole and holy for us should be foremost in our minds. Not only is this process essential for us to experience the peace and healing we deserve, but it’s essential for the healing of our world.

As Miracle Distribution Center begins its 45th year of service this year, we here at the Center are committed to this healing for you, for us, and for the world. We are all part of this celestial speed-up, and we do have an important part to play. Accept your part as this new year is born; be fully present for what appears to be the painful issues as well as the joyous ones; and remember, you do not walk alone.

“If you knew Who walks beside you on the way that you have chosen, fear would be impossible.” (T-18.III.3)