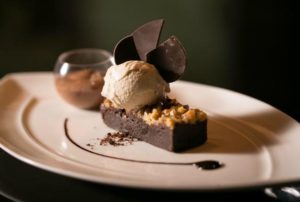 Legend has it that the first brownie was made at the Palmer House Hotel in Chicago, Illinois at the request of Bertha Palmer, socialite and wife of the owner, Potter Palmer. She wanted something cake-like and small that could be served to the ladies at the Columbian Exposition for the 1893 Chicago World’s fair. Working with the hotel pastry chef, she came up with this delicious confection. In 1898 the first reference to the brownie in America appeared in the Sears Roebuck Catalog published in Chicago. If you like your brownies, then you must thank Bertha!

Isn’t this a fun story? Now you have a great legend to tell over dinner or at a holiday gathering, especially if they are serving brownies! 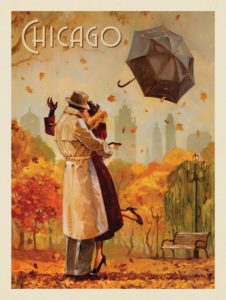 I always find it interesting to learn about the legends of things, so when we were in Chicago for our Holy Encounter Weekend a few years back, we spent a couple of days before the event touring the city, learning its history, and experiencing its museums and sights.

Another misconception is why Chicago is called the second city. Most people believe that New York City is the first, and Chicago came in second. Wrong again! It’s called the second city because it completely burned down in the great Chicago fire of 1871 and another city (the second city) was built over it in 1879. And, contrary to the children’s history book I read as a child, the fire was not started by Mrs. O’Leary’s cow kicking over the lantern. Another myth bites the dust!

The more we learn, the more we realize we simply do not know. I have heard it said the most enlightened statement we can say is “I do not know.” As easy as that sounds, for many of us it is the hardest thing to do. We think we should know, and therefore we try to figure things out from, in many cases, bits and pieces of our own thinking that really does not show us the full story.

We make mistakes, and instead of accepting responsibility for our mistakes, we try to justify our reasoning — hoping that no one looks too closely at our illogical logic. This is how the ego works. It’s dancing as fast as it can in order to keep you distracted so you will never look at the chaos it creates. As A Course in Miracles tells us,

“The distractions of the ego may seem to interfere with your learning, but the ego has no power to distract you unless you give it the power to do so. The ego’s voice is an hallucination. You cannot expect it to say ‘I am not real.’ Yet you are not asked to dispel your hallucinations alone. You are merely asked to evaluate them in terms of their results to you. If you do not want them on the basis of loss of peace, they will be removed from your mind for you.” (T-8.I.2)

What can we learn from all of this? Well, the ego only has the power we give it. And while you may think you don’t give the ego power, the more you dwell in fear, anger, attack, etc., the more power you give to the ego. It is subtle.

The Course does not advocate we fight against these feelings when we have them; it asks us to just look and evaluate them in terms of the value they give us in our lives. As it says, if you decide you don’t want them based on “loss of peace, they will be removed for your mind for you.”

Wow, you don’t have to do anything but look and see the hallucinations of the ego for what they are: nothing. And when you withdraw your loyalty to its nothingness, it will be removed for you. Why does this make sense from the Course’s perspective? Because it is God’s pleasure to give you the Kingdom, but He cannot give you the Kingdom when you are clutching to your pain.

The Course tells us “the world will end when its thought system has been completely reversed. Until then, bits and pieces of its thinking will still seem sensible.” And isn’t that true?

We try desperately to make sense of fear, anger, and attack in the same way we might make up legends to justify our thinking and opinions. It is only when these are brought to the light that we really begin to understand and heal.

Let’s begin (again). We don’t have to be perfect at turning to God; we just need to turn to God. When we turn away and choose to dwell again in anger and suffering, we can turn to Him again. Then again and again and again. We will need vigilance, as the Course tells us, for God and His Kingdom because we have valued the fear and anger of the world so much more. It will take effort on our part until we realize effort is not necessary. Sound like an oxymoron? Well, yes and no. “Yes” it does take vigilance, but also “no” because there really is nothing else but God and His Kingdom. Again, we have just given a lot of nothing a lot of power in our lives.

What now? The Course wisely offers its gentle guidance to making the choice for healing and peace as it says,

“He [each one of us] need merely learn how to approach it; to be willing to go in its direction. He need merely trust that, if God’s Voice tells him it is a lesson he can learn, he can learn it. He does not judge it either as hard or easy. His Teacher points to it, and he trusts that He will show him how to learn it.” (M-14.4)

Legend or learning? Neither. It is a guarantee, and it is time we take it.

“When you unite with me you are uniting without the ego, because I have renounced the ego in myself and therefore cannot unite with yours. Our union is therefore the way to renounce the ego in you. The truth in both of us is beyond the ego. Our success in transcending the ego is guaranteed by God, and I share this confidence for both of us and all of us. I bring God’s peace back to all His children because I received it of Him for us all. Nothing can prevail against our united wills because nothing can prevail against God’s.” (T-8.V.4)