45 Years in Retrospect . . . The life of Miracle Distribution Center – Part 1

In celebration of the 45th Anniversary of the Center, throughout the next several issues in The Holy Encounter we will be sharing its journey with you. Though the Center was founded by Beverly and Richard Hutchinson, it has developed a life of its own. These articles will share the Center’s birth, growth, life and purpose as it continues to evolve and support students of “A Course in Miracles.”

I once read that a coincidence is an event in which God has chosen to remain anonymous. In looking back on the events that lead us to start Miracle Distribution Center (MDC) in 1978, it is clear to me that God’s purpose was in every event, even though they seemed like coincidences at the time.

In looking way back, it was a “coincidence” (from our new definition) that I was born into my family. There could have been no better place for me to grow in my spiritual journey. My parents were very supportive and encouraging as I was growing up. Even though we did not attend church often in my early years, my parents were always reminding me and my brother of the power, presence and love of God in our lives. Their truly unconditional love was one reminder and so was my mother’s favorite saying, “With God, nothing is impossible!” 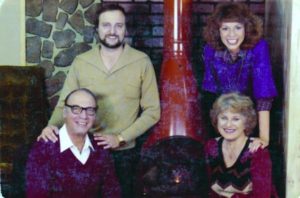 The Hutchinson Family: Richard and Beverly (standing) with their parents, Clarence & Tona in 1978

It was my parents’ quest for this loving, caring God (which they had not found in traditional religion) that brought us to our first Unity Church in Portland, Oregon. We felt very much at home. Even though I was only ten years old when we first went to Unity, I was deeply drawn to this loving, compassionate, ever-available God of which they spoke. God became a friend who was always there to help and love me. I felt at home with Him.

So, one could say that finding Unity was a “coincidence,” because it really gave me my spiritual basis. But, I cannot leave out a very important part of my spiritual education: my brother Richard. The whole family felt that Richard was our spiritual “Columbus.”

Like Columbus’ radical approach to a flat world, Richard was always exploring alternative philosophies and approaches to life. Everything from ghosts to UFOs, Eastern thought and Christian mysticism, Richard’s alternative thinking fell on “fertile ground” with me. As a matter of fact, at a very early age, he was the one who showed me an alternative perspective on the “bars” of my crib; he showed me they could be thought of as a Jungle Gym for ease of escape! That was just the beginning of his “direction.”

With this kind of background, you can probably guess that it was Richard who brought A Course in Miracles to the attention of our family. He actually found an article about the Course in the first issue of New Realities magazine. That article literally set our lives on the path that would become my life’s work. That event, too, was a “coincidence.”

James Bolen was the editor of a magazine called Psychic. When he received the manuscript of A Course in Miracles from Judith Skutch Whitson (president of the Foundation for Inner Peace, the original publisher of the Course) he was so touched by it that he begged Judy to allow him to run an article on the Course.

Judy made no decisions by herself about the direction of the Course and always asked that her prayer group (which consisted of Helen Schucman, scribe of the Course, Bill Thetford, co-scribe, and Ken Wapnick) join with her in asking the Holy Spirit what they should do. The answer was clear, but not satisfying to Jim. Their guidance was that the Course was not to be associated with anything “psychic.” Jim was determined to do an article, so he asked if he could run an article if he changed the name and thrust of the magazine. The group asked again and the answer was yes. So, New Realities magazine was born with its premiere issue about A Course in Miracles. It thereby became the first national magazine to run an article about the Course. 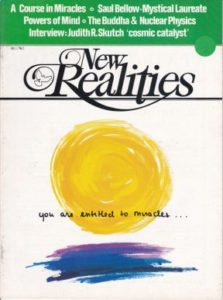 Richard was a subscriber to Psychic magazine, so when the first issue of New Realities came to his mailbox, it seemed like a “coincidence.” The articles and stories on the Course were riveting. We wanted more, and so we ordered the books, and that was it. We were hooked.

It was a series of “coincidences” that brought me to Southern California in 1978, with the Course as my constant companion. With my background in theater arts and broadcasting in Oregon, I set out to take Hollywood by storm. My first year in Hollywood was fairly successful: I found an agent, became a member of the Screen Actors Guild, and did five television commercials for companies like Lipton Soups, Milton Bradley Toys and Quaker Oats. This success, however, never seemed to bring me quite as much joy as my study of the Course.

Richard and I had started a study group in Orange County at a local Unity church where we studied with a handful of interested people. At that time there was very little peripheral material on the Course to help students study, very few stores actually carried the Course, and there was certainly no Amazon. So, we began ordering cartons of books for interested students, keeping track of and assembling a list of study groups for people to find support as they studied, and I began sharing insights on the phone and in person with people about the application and understanding of the Course.

Life was busy. Richard and I had our own worldly work and then spent evenings and weekends doing the work we were committed to do with the Course. Somehow, though, there was no question we were supposed to do this work. The feeling we had seemed to be echoed in the lines from the Manual for Teachers in the Course which says,

“Forget not once this journey is begun the end is certain. Doubt along the way will come and go and go to come again. Yet is the ending sure. No one can fail to do what God appointed him to do.” (M-Ep.1:1)

Of course, there was doubt along the way, but there was always a feeling that what we were doing was right and needed. It was this feeling and not the worldly support or affirmation that kept us going, since most of the time there was neither. 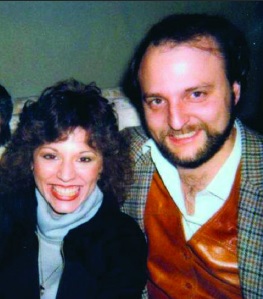 One day, Richard walked into my office, as I was manually typing the last keystroke to a study group list (remember, this was before computers). As he sat down, mentioning he just ordered another case of Course books, he chuckled to himself and said, “Ya’ know, we’re sort of like a miracle distribution center!” I groaned in response to his comment, as I pulled the page from the typewriter and thought nothing more of it.

Two days later, Richard again walked into my office and proudly laid business cards down on my desk that read: Miracle Distribution Center. I was stunned! “What a dumb name!” I exclaimed. “Why did you do that?”

“It’s what we do, so I thought we should make it official,” he said with a grin.

Thinking back now, I don’t know why I didn’t just say, “Let’s pick another name” — it is a long name to say and quite a mouth-full! Not to mention the confusion we have with people thinking we were the Miracle Grow plant food company, Miracle Ear hearing aids, or a food distribution company. But for some reason when Richard brought in those business cards with that name on them, I felt it was done — as if a power greater than I had said, “This is it, now heal your perceptions and carry out my plan!”

So, in 1978, with “a little willingness” and a few “coincidences,” we began Miracle Distribution Center in heart, mind, and action. The Center really had no form; we worked out of our homes, held meetings at churches, and shared office space. It was apparent at that time that the form of MDC was not the primary focus. It was the content of our work and the dedication that was the centerpiece of what we did. We only knew one thing: the Holy Spirit was directing us to be of service and meet the needs of those who were directed to us — how that looked was not our concern.

I have always liked this thought, for it seems to sum up the purpose of our work and MDC. The Holy Spirit has proven to us that His message can be seen beyond the eyes; His song can be heard beyond the ears; and that His hand can be held beyond the physical. No body can contain His Spirit — nor can any physical center. Our purpose is to walk with Him and to help all our brothers on this path to do the same. We all have a very important purpose, and He is ever guiding us.

In A Course in Miracles we read, “What could you not accept, if you but knew that everything that happens, all events, past, present and to come, are gently planned by One Whose only purpose is your good?” (W-pI.135.18:1) I must have felt this awareness somewhere in my mind and heart at the moment Richard laid those business cards in front of me with the name Miracle Distribution Center on them, but I still wish the Holy Spirit would have picked another name!